I am so road weary, 14 hours and 5 states will do that to you (OH,KY,TN,ARK & TX). We had a very good trip, every year the kids say they’re not going back but by the time October/November rolls around again they’ve forgotten about the very long ride. I’m sure no one has ever heard of Atlanta, TX no I didn’t mean to say Atlanta, GA, my Father lives in Atlanta, TX and my Uncle Ronnie lives in Bivins, TX you don’t know country until you’ve spent time in Atlanta or Bivins, TX I’m talking dark like you’ve never seen, no cell phone reception, red dirt and satellite tv because there’s no cable kinda country. I thought my kids would lose it when they realized their cell phones wouldn’t work but they adjusted.

Here's a pic of my Father wearing the robe and pj bottoms that I made him last year. I'm going to make him and my step-mother matching robes this year. Since they don't celebrate Christmas I can wait and make them after the holidays. 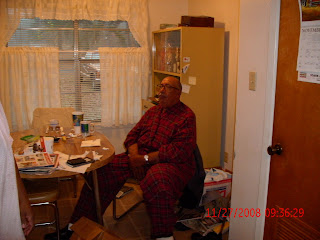 The saving grace is my Uncle Ronnie’s house, it’s gorgeous, it’s a log home you can’t call it a cabin because although it’s only 3 bedrooms it is the best designed and well thought out log home I have ever seen. Uncle Ronnie designed and built most of it himself, he is a retired Army Lt. Colonel and after spending all those years in the military he said it was time for him to go to Bivins, TX, he bought up all the land so that no one could build a house close to him, the closest house is my cousin Sharon’s. There’s definitely advantages to country living but I don’t know if I could do it. My Uncle Ronnie has well water and I swear it taste way better than Evian.

He owns everything as far as the eye can see. I was trying to get a picture of the oil well horse, they were drilling for oil for years but no luck or I should say it was lucky because my Grandmother had sold the mineral rights to buy the land, so if they had found oil we still wouldn't be like the Dallas Ewings.
This is the second year that we’ve gone to TX for Thanksgiving. The food is outrageously good, Uncle Ronnie smoked a Ham and we also had turkey and a hen that my Aunt Vicky wouldn’t take responsibility for, the side dishes were too numerous to name, cornbread stuffing, oyster stuffing, greens, chicken spaghetti, green beans, corn on the cob, sweet potatoes and I’m sure I’m forgetting some, I drive all that way so that I can make german chocolate cake, 7-up cake and my Grandmother’s homemade yeast rolls. Vicky also made a whip cream pound cake which was awesome. I made two german chocolate cakes one for Uncle Ronnie and one so that Vicky’s sister could take one home, it’s both their favorite. 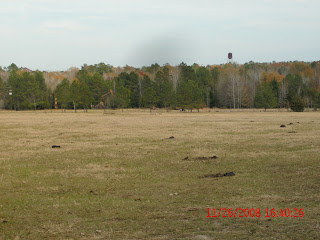 This is Gerred, Aunt Vicky's nephew bring in more wood for the fire. 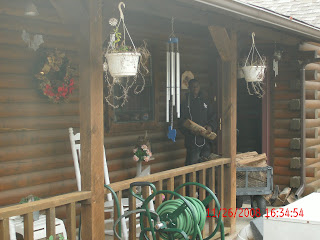 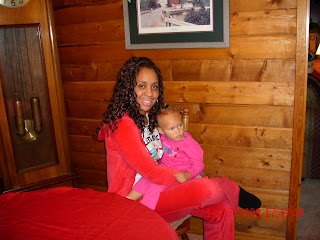 This is the road to Uncle Ronnie's house as you can see you can't see his house, you have to drive about 1/4 mile to get to his house and you better know where you're going because you can't see it from the road. 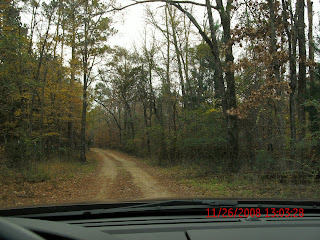 Of course there was some fabric shopping done, their Wal-Mart still has a fabric department and had a really large selection of $1.50/yd fabric, I purchased these pieces and I have a few projects in mind but right now I’m too brain dead to go into details. 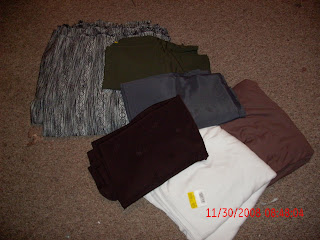 I do plan to make Christmas aprons for my friends with the Christmas pieces, my Aunt Vicky had one and I thought it was a really cute gift idea. 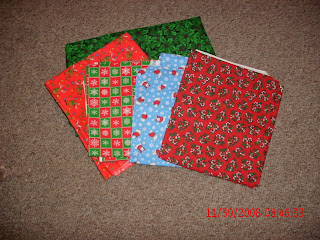 My Father doesn’t celebrate Thanksgiving but that didn’t stop me and my step-mother from taking advantage of “Black Friday” at the local Wal-Mart and you know if it’s as country as I said Wal-Mart is pretty much the only game in town. We wanted the portable DVD player and the HP printer/scanner/copier, the DVD player was $49.00 and the HP was an unbelievable $29.00 so both were worth dealing with this crowd and waiting in line for over an hour. 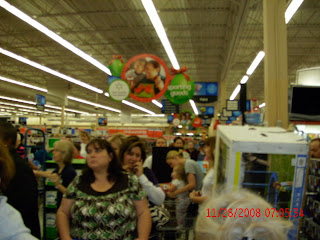 Every time we go to Texas I buy my Grandson a cap gun because they still let the kids play with guns in Texas, in Cincinnati if you make the gun sign with your finger you can get expelled from school. As you can see he really enjoyed playing cowboy, my Dad kept calling him Two Gun Pete, which I’m sure is a reference to someone we’ve never heard of. 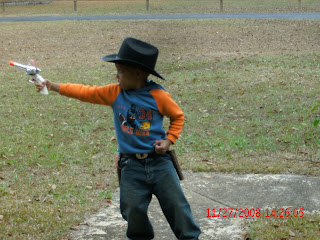 He was all into playing cowboy and really channeled that "Two Gun Pete" character. 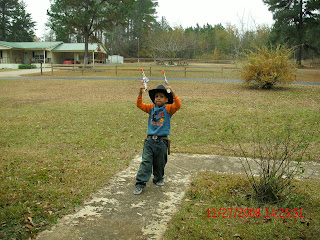 Since we live so far from any family it’s always very nice to go visit my Father and Uncle and have a family Thanksgiving, it also helps that the food is off the chain. I met a cousin that I don’t ever remember meeting, my cousin Sharon’s brother was in town from Nashville, TN I think we had 4 states represented, OH, TN, CA and of course TX.
My Father gave me the best gift ever and now that I have the scanner I will be able to share them. My Mother died when I was 20 and that threw everything and everyone into a tail spin as a result I didn’t have any pictures of me or my sisters when we were little. My Father gave me some pictures that he said a neighbor of ours found in the alley and gave them to him so that they wouldn’t be thrown away. They are precious, I have to get a USB cord for the scanner and then I will post some of those pictures. I cannot thank Thelma and Ernest enough for rescuing those pictures.
I'm exhausted and have to do the laundry from the trip and get ready for work tomorrow. From what I've read on the blogs it looks like everyone had a wonderful Thanksgiving, now on to the big one --- Christmas.
Posted by Tanya at Sunday, November 30, 2008

Glad you had a beautiful Thanksgiving.

What a cute lil family. I just love your lil boy with his guns and cowboy hat!