Pay it Forward, it was my friend Anita’s birthday yesterday so I took her gift bag to work today and she cleaned up, she kept telling everyone that she taught me how to make the gift bag and she’s right she is responsible for starting our little birthday club. 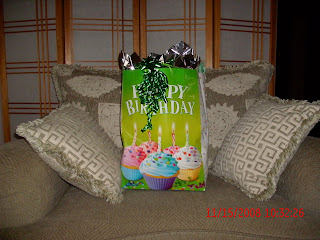 As I said they don’t bake so I fix whatever cake they request and Anita wanted a German Chocolate cake. Of course she wasn’t going to share; this was her cake to take home so I made two chocolate sour cream sheet cakes to have at work. What is it about cake that makes people go crazy you would have thought I was giving away $100.00 bills the way they were acting, my cakes are exceptional but damn it’s still only cake. 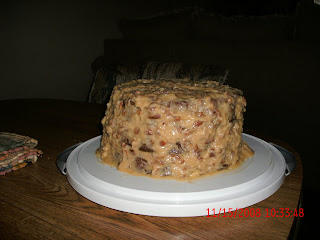 I finished the jacket in time to wear it to tonight’s dance and if imitation is
the sincerest form of flattery then Sheila should be very flattered because I am totally copying her bottom of the stairs pose lol. 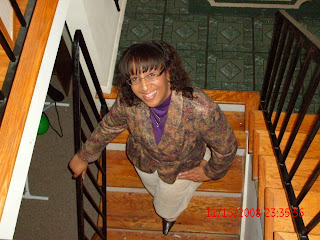 I was going to wear the jacket without anything under it but it's cold here and I found this purple mock turtleneck that I thought would work and I'm wearing suede pants (I got these for $20.00 at the Wilson's outlet, I ain't nothing if I ain't thrifty) and brown boots, yep working it with my I'm gonna sweat hair-do. I was worried about wearing the pants because it was raining earlier and I didn't want to be as Rob said "like a wet ball glove" but luckily it stopped and I didn't have to go with plan B's pair of jeans. 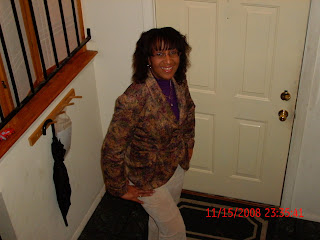 Now on to the festivities, first let me say that I love being “old school” I am 48 and proud of it and I love my people that being said I had a ball with my girls, Christine and Mo and some other ladies from my second job, we work hard and we play hard. How can you not have fun when they’re playing, The Miracles “You really got a hold on me” and The Temptations, “My Girl” and of course the God-Father of Soul, “Say it Loud I’m Black and I’m Proud” yes they did and we had a good time, danced enough to work up a sweat. (Can that count as my excerise for the day?) 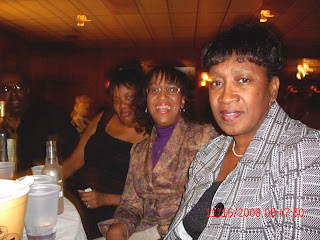 The dance was BYOB but you know that also means BYOC 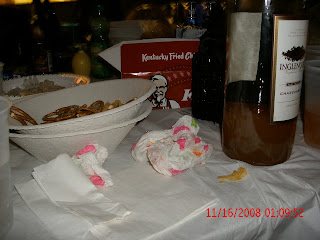 I just have to mention this, most of my friends are older than I am all are in their early 50’s but I was some what taken aback tonight when I was approached by a much older gentleman who requested my phone number, I was stunned to realized this is my demographic now lol.

Well that's about it, I really hope to have an update on the sweater, I'm so ready to be done with it and I've told myself that I have to stop sewing for myself and get started on my Christmas projects, last year I made 6 pairs of boys pj's, a gown for my friend Gwen and two many hat's and scarf's to count. I tried to get a jump on my hat and scarf sets but when I went to Chicago this summer I took several of them and gave them away, I really want to see if they can stand up to "The Hawk". I lived in Chicago for 1 year, one winter was all I could stand my little California bones didn't know what to do with that kind of cold. Cincy gets snow but nothing like Chicago. Once I get "the sweater" finished I am working on a toddler sweater to go with a hat that's finished and anything else I get done before Christmas will be a bonus. It's going to be hard, this is the first time since I started sewing that it's all about me and I'm loving it. Of course when my daughter was growing up it was all about her, she had a new dress almost every Sunday for church, so much so that one time we went to church and this little girl started crying, I asked her what was wrong and she said, "she always has a new dress" so I promised to make this little girl a dress much to my daughter's horror, she doesn't share well.
It's late and I'm rambling so I'm going to stop and go to bed. I hope everyone has a great weekend.
Posted by Tanya at Sunday, November 16, 2008

You are working that staircase photo shoot. You look great and like the purple top with it.

Hot mamma! Wear nothing under the jacket? Wow! You're brave. Love the potos and yes, I want some of that CAKE!!!! Can you just see me in front of the chocolate cake??!!

Your jacket looks fab! Wish I had some German chocolate! Thanks for your comment on my blog.