Sewing Isn't For Everyone

And I may just have to admit that my DD probably won't ever sew. We purchased this one seam prefab dress from Hancock, with the understanding that she would sew the one seam down the back and I would make the lining and a short jacket to go with it. 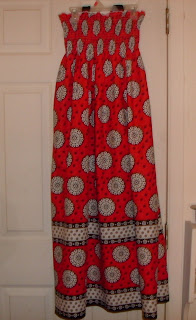 Today's her graduation and last night she begged me to do it for her, of course I did and after doing it realized it probably wasn't that great of an initiation project. She would have needed to match the print while sewing the one seam which could have been a little frustrating. 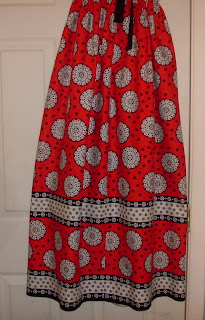 And the lining was "interesting" I just cut a piece on the fold, serged the edges and attached it to the top by stretching it as I sewed, then I discovered it wasn't wide enough so I had to cut it and add two pieces, she surely would not have enjoyed that process. I also decided to add two straps because the lining made it a little heavy and we don't want to have any slippage issues. When I added the two pieces to the lining they weren't as long as the original so I ended up cutting the lining length, it's short but as long as it covers what God gave her it should be fine. Knowing her aversion to undergarments, a lining was a must, now I can relax when she's taking pictures in direct sunlight. 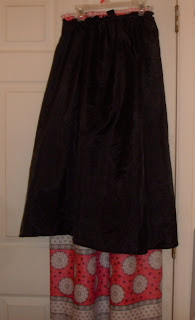 There will be lots of graduation/birthday/graduation festivities this weekend so I don't know how much "real" sewing I will get done. Trisha's maxi dress is waiting patiently .
Posted by Tanya at Friday, July 24, 2009

Sewing isn't for everyone. I started as a child, then took a 20-year 'break' before learning to appreciate it. Nice try with the dress though!