My very first pair of socks, the toe on the second one is intentionally covered because it looks a hot mess lol. They are very warm and I think I'm hooked on knitted socks. 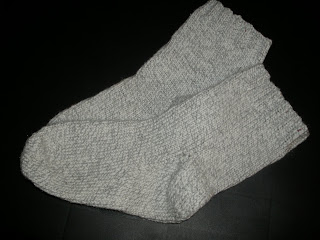 I've already started another pair, I'm using the same book, Getting Started Knitting socks by Ann Budd, these are the magic stripes socks, I love the colors in this yarn. The next pair I make I want to do some type of pattern. 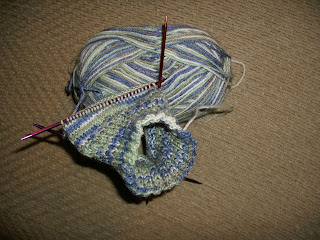 Look what came in the mail, my give away prize from KMQ. The pin cushion is too cute, much better than the one I made lol. I really needed scissors, I'm sure I'm not the only one whose children use their sewing scissors to cut paper (ARGH!). 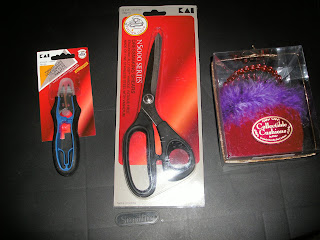 This is what's up next, I have a pair of pants and a suit cut out and waiting but I'm going to do this instead, hopefully I will get to the other's some time over the weekend. 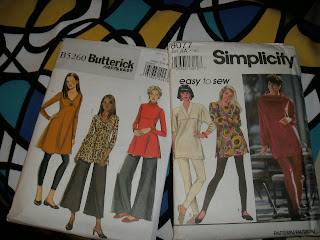 You can see this fabric made using Vogue 1027, here
I think she did a great job on her dress, I didn't even realize I had purchased the same fabric until I was reading a different post on her blog. A lady had this in her cart when I was in Joann's last weekend and I just had to have it. I'm leaning toward Butterick 5260, I've made this before and really like it, I was going to do the turtleneck but I think that might be a bit much the
v-neck is probably a better choice for this bold fabric. 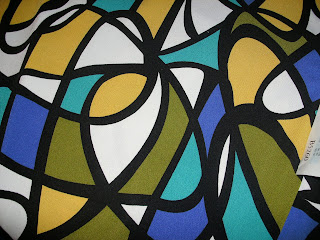 I hope everyone has a safe and happy Halloween, I wish I had a party to go to I love costume parties. Which reminds me of the best Halloween party ever, this was in LA (of course) it was time to judge the costumes so everyone who entered the contest was going around in a circle to a song I can't remember now but imagine me and my friends surprise when we spotted "The Unknown Rifle man" his costume consisted of a brown paper bag over his head, a rifle and another bag strategically place (yeah that's where) he was disqualified and we spent the rest of the night trying to figure out who it was, someone asked my friend to dance, I looked down and recognized his boots, he did have on the same boots with his costume, I whispered to my friend that that was "The Unknown Rifle Man" and she politely declined. If you're not old enough to remember The Unknown Comic on The Gong Show it won't make much sense but still it's my favorite Halloween story.
Posted by Tanya at Friday, October 30, 2009

Great job on the socks! I started on a pair for my mom but frogged it. Thanks for your commentary on my blog! I like the v-neck version for the tunic. Good luck with your suit and pants, too!

I used to hide my scissors from my kids, but they always found them. Great socks. Love the fabric. My husband and i just came home from a costume party. We went comfortably (check out my last post) dressed so it was fun.

Great colorway on the sock and looking forward to seeing them. That fabric is to die for and initially saw it also on NGLaLALa, and the dress looks great on her.