My Little guy requested a robe, although he called it, "that thing that Kendall wears when he comes out the shower". I made him one out of this navy fleece, I was contemplating making these this year for the boys Christmas gift so I wanted to see how long it took versus the 1 hour pjs. It didn't take that much longer than the pjs if I get started early it could happen. 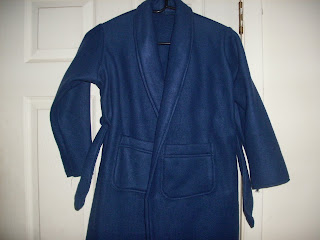 Since he's 6 I attached the belt to the back loop, the pattern only called for two side loops but I knew the belt would be history if I didn't attach it. 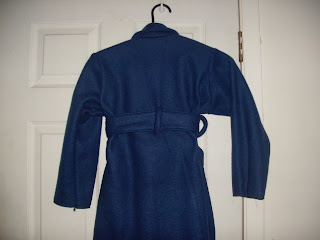 Now I'm cleared for a weekend of sewing for myself. The co-worked I promised the dress to let me off the hook she said I could make her a hat and scarf oh yeah that's much better, I can knock that out, I just really, really don't like sewing for people, is that wrong?
Let's see what the weekend brings...
Posted by Tanya at Friday, October 23, 2009

I don't like sewing for other people so much......unless it is my idea! Definitely not when people ask me.....nothing wrong with it!! Your robe is cute! Good way to use up some stash! I keep making things that use 1/2 yard....My stash continues to grow!

I only like sewing for other people as long as those other people are my grands or the children of people I know very well. I like it when someone says, "Just make whatever you want to make and I'll pay you for it." I never sew for myself. I need to, though.

Your Grandson is going to love is robe... great job. When it sounds like someone is about to ask me can you.... I cringe before they can finish the question.

I DO NOT sew for other people! I haven't forgotten about you but with moving and all I can't seem to find my way to the post office. It's in my car and I have every intention of mailing it today!