That's the only reason I can come up with why this isn't finished. It's coming along great but I'm so unmotivated. All that's left to do is add the lining, buttons and hem it. Maybe next weekend. 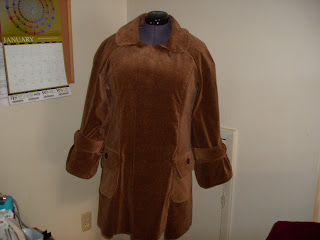 A co-worker request a crocheted hat for her newborn, the first one looked too big so I made a much smaller one, one of them has to fit. 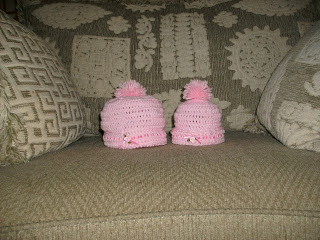 I made another caplet with the boucle and bernat super saver yarn, came out great just like the first one. These are really warm and work great when running errands. 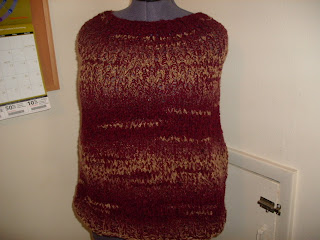 Of course I had to make a matching hat, it's the slouchy tuva beret again I used the coordinating beige on two rows cause I'm a matchy, matchy kinda girl. 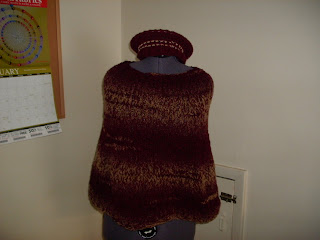 Well that's it for me, please send some sewing vibes my way so the Simplicity 2508 jacket will get done soon.
Posted by Tanya at Sunday, January 23, 2011 2 comments:

I finished the Transverse Cardigan from the Spring 2010 Interweave Knits. I lengthened the body, changed the sleeve length and added the garter stitch neckline. I would have liked it a little longer but other than that I'm very happy with it. While watching Knit and Crochet Today, a knit designer said that the biggest mistake knitter's make is following the pattern, I couldn't agree more, coming from a sewing background I never hesitate to change a pattern to suit my taste. 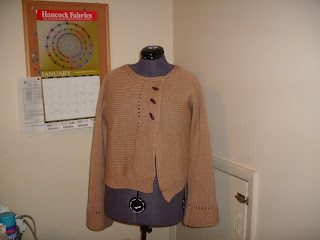 Love the toggle buttons, you have no idea how long I debated buttons but once I saw these against it the decision was made. The pattern calls for two large buttons I wanted three. 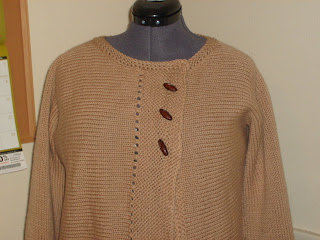 I also added a snap at the neckline.

I used the same lining fabric that I'm using for the Simplicity jacket to make a button band.

Despite my knitting mojo being in full throttle, I did manage to make progress on Simplicity 2508 and with another day off I should be able to finish it. 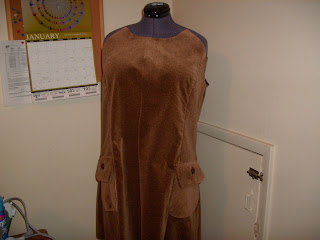 Patch pocket, I didn't cut the flap on the bias, doh. 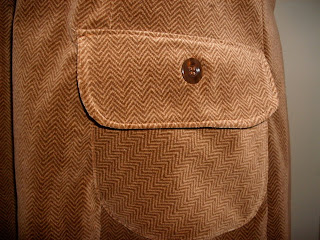 I hope everyone has a wonderfully creative Martin Luther King Day.

I added a few rows of garter stitch for a more finished neckline and hope to duplicate the cuff garter stitch detail on the bottom but as you can see that little ball of yarn on the side is all I have left. The yarn is Premier Merit 100% wool, I got it on sale at Hancock's for .69/skein. Now that the Transverse Cardigan is blocking... 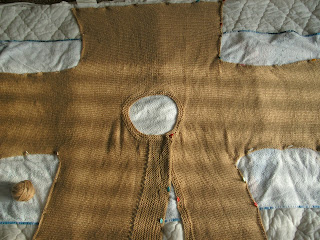 I can get back to this, Simplicity 2508. There have been some awesome renditions of this jacket, starting with Opal's two years ago, can't believe it's been that long but she posted it on November 5, 2009, she's been silent for far too long, we miss you Opal. 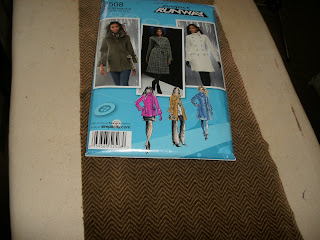 Close up of the fabric, I'm not copying the fabulous EricaB who just finished an amazing herringbone jacket although that's never a bad ideal. I've had this fabric for at least two years and it's time has finally come. I recovered from a potentially disastrous cutting error, which I'll come clean about once it's finished. 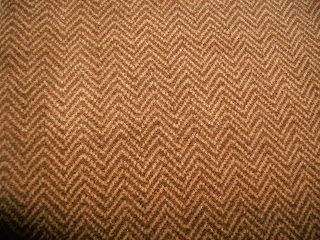 I'm looking forward to seeing many wonderful creations over this long weekend.

Can't get off the PJ train

After making the crocheted slippers for Gwen I was worried because they can be slippery so I made these matching slippers and they were so darn cute I just had to have some for myself. 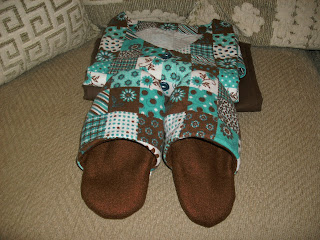 Back to JoAnns for this fabric. 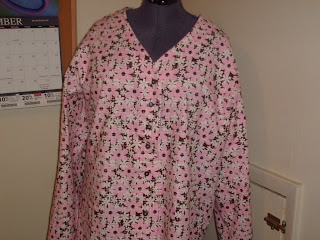 And a few hours later I'm not jealous anymore. 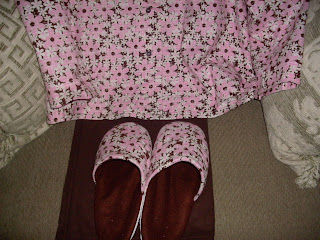 This is the cascade beret, a free download from Raverly I used the wrong yarn but it still came out nice. 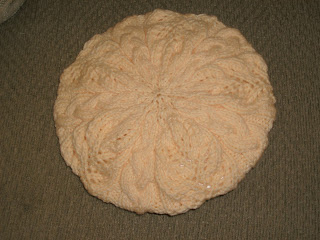 Slouchy tuva beret, a co-worker requested a black hat but then changed her mind to winter white, she waited a long time for this hat so maybe she'll get both. 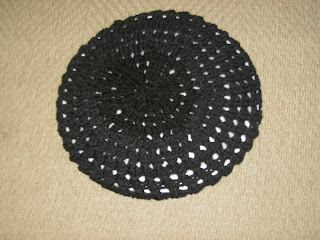 Finally a mobius cowl, I've wanted to make one of these since I first saw the pattern, very easy once you get the cast on, finished it in one evening. Yarn is Lion Brand homespun. 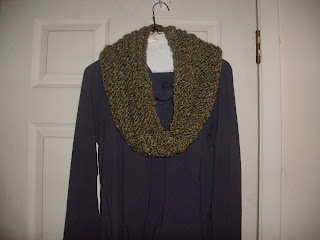 One more day off, let's see what develops. I hope everyone had a great New Year's Day.
Posted by Tanya at Sunday, January 02, 2011 2 comments: